From The National File:

Cheney’s comments that “I’m not going anywhere” and “This is a vote of conscience. It’s one where there are different views in our conference,” drew praise from Crenshaw, who, like the former Vice President’s daughter, has a history of supporting policies that are immensely unpopular among his own constituents.

“Let’s get some truth on the record,” Crenshaw tweeted. “@Liz_Cheney has a hell of a lot more backbone than most, & is a principled leader with a fierce intellect. She will continue to be a much needed leader in the conference, with my full support. We can disagree without tearing each other apart.”

Let’s get some truth on the record: @Liz_Cheney has a hell of a lot more backbone than most, & is a principled leader with a fierce intellect. She will continue to be a much needed leader in the conference, with my full support.

We can disagree without tearing eachother apart. https://t.co/yMLary1kLj

In a move that surprised many, fellow house lawmaker Gaetz took to Twitter to rebuke Crenshaw for endorsing anti-Trumpism in the face of 74 million Trump voters.

“With all due respect to Rep. Crenshaw, this is a minority view within the minority party,” Gaetz wrote.

With all due respect to Rep. Crenshaw, this is a minority view within the minority party. https://t.co/Q0kVVhlH4m

In August 2019, National File’s Managing Editor unearthed a photograph of Dan Crenshaw schmoozing with no less than five members of Moms Demand Action, during a private meeting with the the Bloomberg-founded anti-Constitution extremist group.

In the photo, members of Moms Demand Action are seen flanking and towering over the diminutive Crenshaw, who stands smiling with hands clasped together against the corner of a blue-walled room. 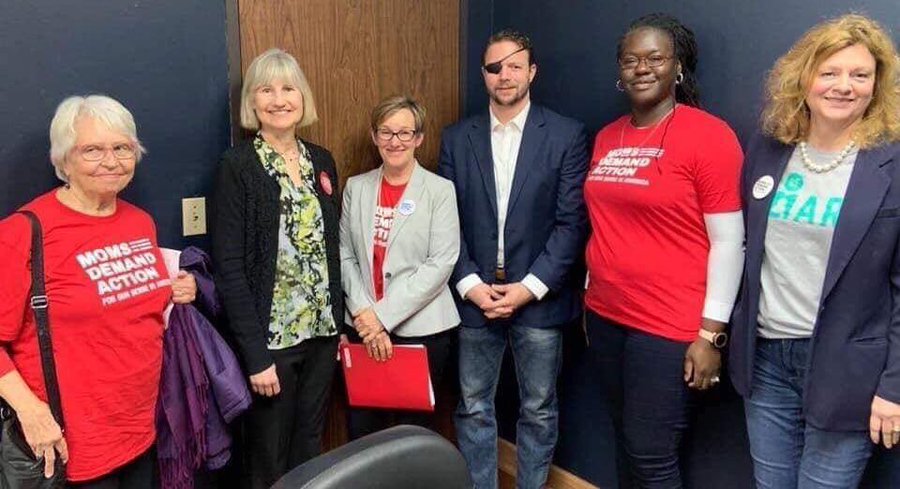 Crenshaw has since made a habit of picking verbal fights with various people who criticize him on social media. It remains to be seen if he will begin furiously replying to Gaetz’ tweets over the next few days.

Police: Suspects Arrested After Man Shot and Killed While Walking Dog in Philadelphia